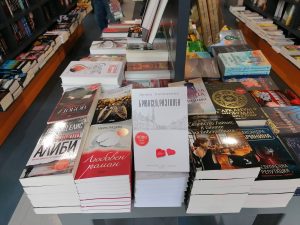 June 9, 2022 – Irina Papancheva’s fifth novel ‘Brussels Naked’ was published in Bulgaria with publishing house Znaci and Hristo Dimitrov-Hindo as an editor. Neyko Genchev has created the evocative cover.
‘Brussels Naked’ is literary fiction. Iris, a young Bulgarian journalist, falls in love with Brussels during her traineeship at the European Parliament and decides to stay. The stakes are high: her marriage. Brussels has many voices, languages and identities. Nine characters from different nationalities and social backgrounds share episodes from their lives, intertwined with memories, mostly from their pre-Brussels existence. Key moments of the journey from the European Constitution to Brexit and some of the issues which have led to the current EU crises are captured through their eyes and experiences. Protagonists from different chapters become involved with one another, stories find their continuation and conclusion, with Iris’s life weaving through them like a red thread.

According to Passa Porta literary guide Jan Dorpmans the book “shows Brussels as it is” and the city “really lacks this sort of literature, unfortunately.” The British novelist Iain Sinclair wrote the following about Brussels Naked: “I thought ‘Brussels Naked’ moved well; belonging, without visible strain, to time and place. You open up the city very smartly, through its districts and diverse narratives. The construction was cleverly managed, the shifting roles of the characters. You give me the flavour of lives lived; meals, drinks, exchanges, solitude.’
Irina Papancheva originally wrote ‘Brussels Naked’ in English. It was then translated into Persian (link) and is expected to come out in 2022. The author translated her manuscript into Bulgarian herself.