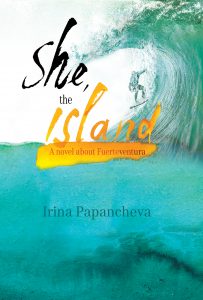 The paths of two couples – Marina and Gerard and the younger surfers, Carla and Gerd – cross on Fuerteventura. They meet a writer who is working on a novel about the exile of the real life philosopher  Miguel de Unamuno in 1924. The writer soon finds herself lost in the labyrinth of their complex relations. She escapes by returning to her book and by travelling the island, absorbing its landscapes, history and culture.

„On the bare island, we were all naked. And each next step of ours or a seeming decision would lead to the inevitable dénouement. I had come to write a novel. In reality, I was a character in a novel. The novel, which the island was writing.”

Irina Papancheva, “She, the island”

“She, the island’ is a wonderful evocation. Beautifully drawn depictions of real people and events from the history of the Fuerteventura are interwoven with fictional characters who are in love with surfing, writing and love itself. The island is a protagonist, a mysterious siren who captures souls. The book is drenched in enchantment.”

“I haven’t read for a long time such an exquisite, contemplative work, both very human and wise. With an intriguing love plot spread through Fuerteventura’s history. Irina Papancheva has described the island so well as a scenery, sensation, magic and mythology that the reader, inevitably, will feel impelled to visit it.”

“An intellectual and emotional feast, ‘She, the island’ could satisfy any taste. It has it all: an engaging plot with many story lines, memorable characters, dramatic turns,  and authentic philosophical and psychological interpretations coming from Miguel de Unamuno himself. All of this captured in the mystical landscape of Fuerteventura.”

“‘She, the island’ is a declaration of love to Fuerteventura. It is not just falling in love, but something deeper, coming from understanding and acceptance. Even if one has never been to the island, after reading the book, they would know it. It has a magical softness. Epochs, stories, destinies, realism and mysticism, legends and truths – all are interwoven. The book is not only a homage to Unamuno, a homage which runs through the changing narratives like a red thread, but a statement of respect to a lost past and to the heart of this merciless place.”

“The book is a unique and valuable addition to the Bulgarian literary tradition. It vaguely reminds me of the research approach of Umberto Eco… All the characters have come to the island with a specific goal – sometimes almost criminal. But they don’t find what they are looking for, instead they find… themselves.”

“The novel “She, the island” is engaging already with its first pages. The dynamics multi-layerness, the accent of the contemporary relationships between young and modern people, combined with a philosophical reference to the past, storylines which can be used for a film – all of this created the premise for me to believe that the book will be a success”.

“She, the island” is a multi-layered and polyphonic novel, interesting not only because of the exotic place where the plot unfolds, but also because of the deep revealing of modern relationships in a globalized world, when everyone can meet anyone anywhere. In this geographical-discovery domain, the contemporary Bulgarian literature is still relatively scarce of good titles. And “She, the island” is undoubtedly a good title of a good book.”

“She, the island” covers directly or indirectly a wide range of topics: spiritual quests, beliefs and choices; cultural heteronomy; the necessity of perseverance and support, which are so atypical to modernity, albeit embedded in the very human nature; the pursuit of the spiritual and physical completeness of the experience in its most primitive and rationalised forms; the boundary between the earthly and the sublime; the immense and at the same time fleeting world, along with the diversity of impressions it evokes; the impossibility of happiness being tamed or grasped. Bulgarian novels, which convey such a colourful palette of questions and interpretations, with their own vision and message, are rare and of real value.”

“She, the island” /excerpt .pdf format/