June 10, 2019: Irina Papancheva participated in the first ever Bulgarian Book Festival outside Bulgaria, organised by the Bulgarian Cultural Association in Belgium in partnership with Librebook Bookstore and Bulgarian publishing houses between 7 and 9 June. The festival was linked to May 24, the official holiday of Bulgarian education and culture and of Slavic alphabet.

Irina Papancheva had a public conversation with the writer Dimil Stoilov about the intimate in her work. She also participated in a discussion together with Emil Andreev, Kalin Terziyski, Svetlina Trifonova and Hristo Karastoyanov with English-speaking readers in Librebook. 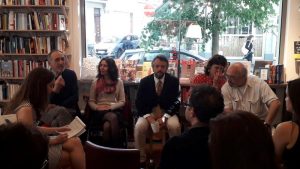 Irina Papancheva also supported the organisation of the festival by joining the communications team.

‘The festival was a very emotional and enriching experience. The conversations I had during these days with other writers and poets gave me energy for months ahead. The individual meetings were very interesting. I was also pleased with the interest of the Bulgarians living in Belgium who visited the stands of the publishing houses and listened to the conversations with authors in large numbers’, said Irina Papancheva.